Where A and B are in and existing contract and A promises to give more to B this promise will be binding if A receives a practical benefit even though B is only doing what they promised to do under the original contract. This rule applies to variations to existing contracts only. In short, if A receives any sort of factual benefit in return for promising to give more to B, a court will find consideration for that promise and A must give the extra to B. You might bee thinking ‘Why do the courts apply a test that is so easy to satisfy?’. One answer is that the courts will try and uphold changes to a contract and do not want to interfere with any variation. When covering this case, and this topic, remember that the courts will strive to find practical benefit because they do not want to invalidate the agreement to give more.

Was Roffey Bros agreement to pay an extra £575 per completed flat binding?

How do I use this case in a problem question? 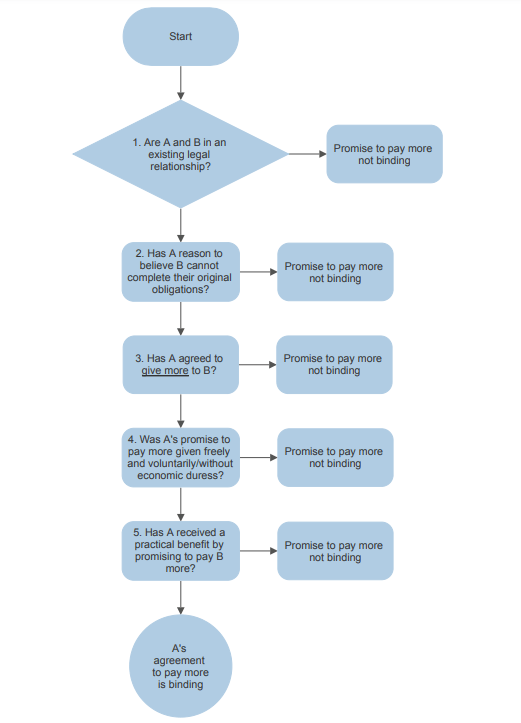 X – the practical benefit test involves looking at the benefit that is received by the party promising more (A). You do not focus on whether the party receiving more has provided something of value (B). This test requires that you examine the benefit that the party giving extra receives only.

X – we judge the practical benefit received at the time the promise to give more is made. If this benefit actually, in fact, does not occur that is irrelevant to whether the test is passed. For example, imagine A promises B more money to complete a house refurbishment on time. A does this as they want to have a party at their home for Christmas. Imagine then that the Christmas party is cancelled. A must still pay the extra money to B as there was a practical benefit to A at the time the promise was made.

Chris is a law tutor. He has tutored over 100+ students in contract law for LLB, GDL, PGDL, CILEx, LLM and more. Chris has taught examined contract law at University level. Find out how Chris can help you with your studies here.